I mentioned in my last post how Matthew was thrilled that his First Penance had been postponed last week due to the snow.  However, that feeling of excitement wore off the night before the scheduled snow date.  At bedtime he was in tears and filled with fear.  Some of us piled onto his bed to try to talk him off the ledge.  Nothing really sunk in until Dad pulled up this picture on his phone. 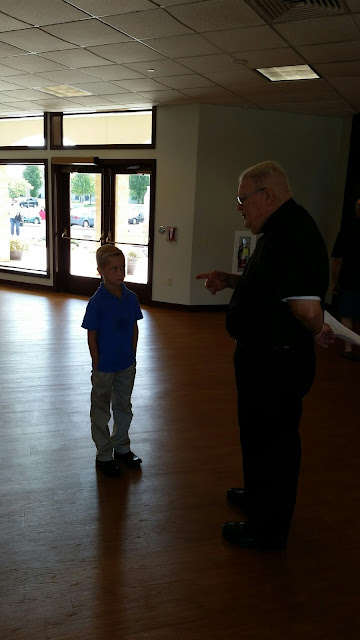 We all had a good laugh at the look on Matt's face as he was talking with one of our parish priests.  For some reason, that's all it took.  His fear went away and off to sleep he went.  I think confession is a scary thing, especially your first time.

The following night at the Penance service the gospel was the story of Jesus, The Good Shepherd.  Ironically, just two hours earlier I had taught this lesson to my first grade CCD students.  In class, we talked about what a shepherd is and what a shepherd does.  The responses I got made me smile.  The children reported that a shepherd takes care of his sheep.  They used words such as protects, and guides, and loves, and feeds.  Making the connection between a shepherd and Jesus was easy after that! Then I read to them the Parable of the Lost Sheep when Jesus leaves his 99 to go look for the one lost.

The homily that night kept the kids' attention.  The priest had the church's lost and found box up front so the kids could see it.  One by one he pulled things out of it. There was an umbrella, a pair of sunglasses, and even a set of keys, just to name a few.  No one has come back to retrieve them.  It was almost as if the owners of the items didn't know they were left behind.  They didn't know they were lost.

He challenged the congregation:  How does this relate to us?  Are we lost?  Do we take the time to seek out the shepherd who is always waiting to bring us back into the fold?  This kind of discernment is critical, I believe.  If we don't admit to being lost, we won't be found.  And in turn, we won't have the opportunity to be protected, and guided, and loved, and fed.

The Sacrament of Reconciliation is our opportunity to be found.  To lay it all out there, to hear His voice, and be forgiven.   Oh! And let's not forget....to receive grace.  What a gift!

Matthew did a great job.  We stopped at the grocery store and picked up a gallon of ice cream to celebrate when we got home.  It seemed only right.

Well folks, it's been a while since I've written anything here.  As I sit down to break my dry spell I'm noticing some things.

~ My internet connection is acting s-l-o-w and I'm wondering if I can be patient enough to continue this post while the letters on the screen catch up to my typing.

~Next to me is a book that seemed to show up out of no where.  Jane Eyre.  Then I remembered that I read that about 4 years ago.  I also remember breathing a sigh of relief at a PTA meeting when we went around the room and had to answer the question, "Did you read any good books this summer?" I was so glad I didn't have to respond with Bear Snores On.

~I'm sitting in my living room feeling blessed as I look at our "new" piano, given to us by my mother in law.  Oh, the history behind this 100+ year old grand.  She reminded me that it was on my second date with Bill on Christmas Eve that I first "met" this piano, along with his entire family as they sang carols around it.

~We had a snow day today.  Matthew was supposed to make his First Reconciliation tonight but early in the day the phone rang.  It was an automated call from the Director of Religious Education cancelling.  I was upstairs when the voicemail came across the machine.  As the call ended, all I could hear was Matthew running around downstairs wooo-hoooing his way from room to room. To say he was thrilled is an understatement.

~Two things I think should be banned.  Twitter and 24 hour news channels.  No one wants to hear anyone talk so much.  Yet, I'm addicted to both. The devil is real, people*.  And yes, if you're on Twitter, I've probably stalked you.

~Regarding the above, I don't tweet much or email CNN, but in my mind I come up with plenty of retorts that do nothing but increase my blood pressure---probably good that there's been radio silence here on the blog.  That may end soon because I do have some titles that you may see in future posts.

The Devil Is Real, People*

A Letter To My Girls About Their Worth

God Is Bigger Than Your Fear

~Maybe this post should have been titled Random Thoughts or Just Letting You Know I'm Alive. 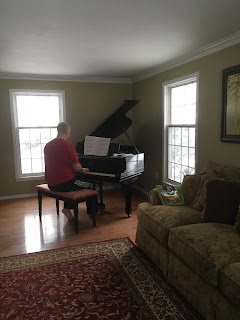