Inductions, Sacraments, and Birthdays, Oh My

I gotta be honest.  Last week started out really tough.  On Monday I was dreading the week ahead.  There was so much on the calendar and Bill was away for a few days and I just felt completely overwhelmed.  It's funny, when you have a baby in the house, your schedule takes an ugly not-able-to-get-much-accomplished- kind of tone to it.  And I don't mean funny-ha-ha.
But when Tuesday came and I'm sitting at work (actually, standing because my job is lunch and recess duty, so I don't sit) I had this A-HA moment.

Everything I had going on was GOOD stuff. What was I freaking out about?  Wait until you see what the week was like below.  I have to say though, the change I had from one day to the next can't just be about having an attitude adjustment. It can't be that simple. It must have a lot to do with hormones, amiright?  And that's all I have to say about that because my brothers read this blog and they might get weird-ed out about this revelation I had.

So, let's continue on to the greatness of the week.

Ann came home last month with a letter saying she was being considered for the NJHS.  She needed to fill out multiple forms about her service, character, leadership, and citizenship accomplishments.  It was pretty straightforward.  She debated about whether or not she wanted to actually be a part of it.  I think it was her lazy side not really wanting to fill out the forms.  We forced encouraged her to do it because there are certain opportunities in life that you just don't turn down.  She handed it in and found out soon after she had been accepted.

The ceremony and reception was really nice.
I could tell she was proud of herself. One more notch on the confidence scale for her.  Bill was away unfortunately, and Mary had too much homework, but I forced encouraged the rest of the kids to go. 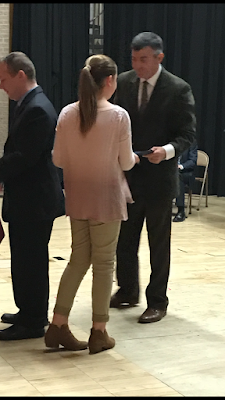 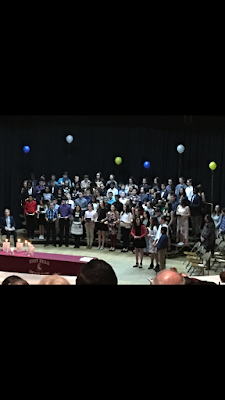 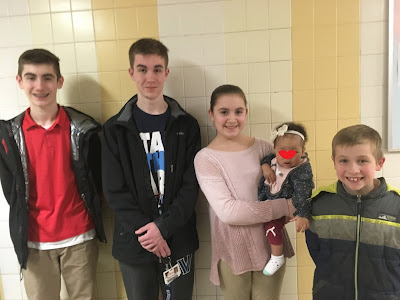 He is now fully initiated!
Funny story.  I had not ordered a red robe for him to wear because I figured he would just use Billy's old one.  I hung it up the weekend prior to help get the wrinkles out.  The day before Confirmation Mary says, "You know that the size for that robe says 5'3-5'5", right?" (Tommy is about 5'10") I hadn't realized that but I figured it would be fine, maybe just a tad bit short.  So I nonchalantly ask Tommy to go try it on.  Oh my word....the sleeves were up to his elbows and the hem was near his knees!!  I scrambled to text everyone I knew who had sons that might be able to lend me one of theirs. In the end, a friend had one to give me and she dropped it off in the nic of time!  You might say the Holy Spirit was looking out for us!

Billy was his sponsor and did a great job. 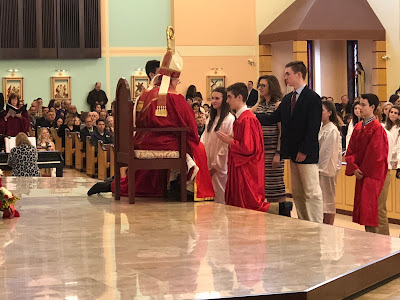 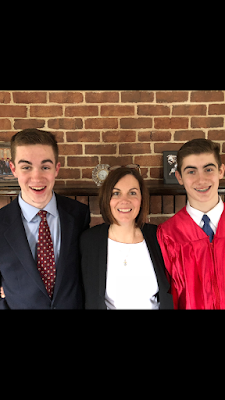 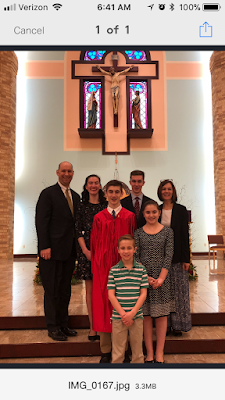 Tommy asked for a low-key celebration....pizza and xbox.  We added cake so it would feel like a celebration.

My little girl is now a teenager.  We did morning doughnuts before school.  After school she and Tommy had to go to their Jazz Band competition. Bill and I were able to head over to watch them perform.
(a special shout-out to my friend Heather who manages to get great pics of my kids and sends them to me!)

We didn't get home until 11pm that night but we managed to squeeze in some ice cream cake to celebrate Ann before bed. 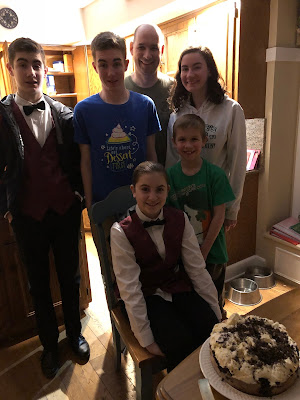 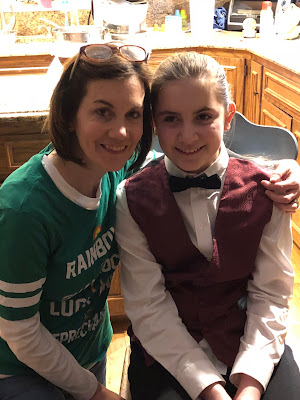 The next day, Ann had some friends over to watch a movie and have pizza and cake. I neglected to take pictures.  But Ann had gotten a Polaroid camera as a gift (so cool, so retro) so we took a picture for each kid to take home.  This was a picture of the one Ann kept for herself.  (she really was happy, just a bad pic of
her 😏) 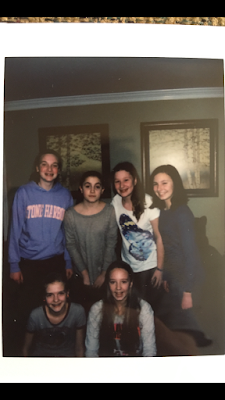 The rest of the weekend was spent doing social stuff with our parish retreat family.  Lots of baking, gatherings, and masses but definitely one of my favorite weekends of the year.  Bill and I went on our parish retreat 10 years ago and it was life-changing.  We have the best parish ever!

I'm so glad to have another snow day to sit back and document the good week we had.

Signing off to spend it with my 7 favorite peeps.

"I really should update my blog" has been a recurring thought in my head for a couple of months now.

Last week the stress was high for me.  I had a court date scheduled that I had been anxious about for 3 months.  We had the kids say goodbye to baby Jackie before they left for school - "just in case."

Well, we all returned home here that day.  But something changed.  What I thought might be a goodbye to our girl has ended up being more time with her than we originally thought.  We will still move along with the plan for reunification with Mom because that is what we are supposed to do. We will keep up with the weekly parental visits, sporadic court dates, bi-weekly home visits from our foster agency and monthly visits from the county caseworker.

None of this is a surprise to me. I read all about it before we jumped in.

On a much happier note, we are in love with this little one and that is exactly what she needs right now. Surprisingly, I think she is what we all needed as well.

It took Tommy 3 months to hold her.  We had to blackmail him.  "No Xbox until you hold her".  It worked.  The joy the rest of the kids had the first time he held her was a moment I won't ever forget.
Now I catch him picking her up, making silly faces, and sometimes just staring at her.

Then there's times when I walk in the room to see something like this: 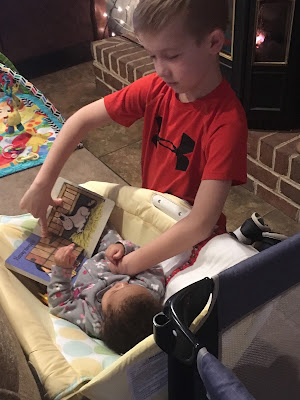 The girls have been a huge help, saving my sanity at times.

And last, there is no other person I'd rather be on this journey with than Bill.  He not only helps so much with what needs to be done, but he is my rock.  He always puts things into perspective.  He is never selfish, always thinks of others....especially the "least of these".  He loves baby J like his own and reminds me that I need to let my guard down as well.  So now I am ALL IN.

A good friend sent me the link to this blog post by foster mom Meg Duerksen.  Oh my goodness. It is so good and is an amazing post with similarities to our own story.   But my biggest take-away was when she wrote the following:

*the “ending” is unknown and i wrestle with the not knowing.
but you know what?  the “ending” is unknown for ALL of us.
we fool ourselves into thinking we know what’s going to happen with our families.
we have an illusion of control but nothing is certain.
so i pray about all of it.
it’s all in God’s hands.  He already knows about all of it.  He knows.

My mother always used to say, "Worry is a useless emotion."  And she was right because it really is all in God's hands. He's got everything under control.  And that gives us the courage to do what we need to do, even if it scares us.