I had given Lent a lot of thought over the last couple of weeks, but it was yesterday (Ash Wednesday) that my inner dialogue became quite entertaining.

6 am. I should make the kids go to mass this morning so they have ashes during school and be shining examples of a proud Catholic.  No, that would be really hard for them in public school.  But does that make me a bad parent for not choosing to make them little martyrs for Christ? How else will they learn?  I can't be that mean.  We'll just go tonight.

7am. Hmmm, no coffee.  I guess I'll have to have tea instead.  Maybe coffee would be a good thing to give up for Lent.  Hey, this tea is good and I'm not missing the coffee at all.  I guess giving up coffee isn't a good enough sacrifice. I will think of something else.  Wine, perhaps?

12pm: I should really think about ideas for this blog post. Like how our sacrificing and doing extra shouldn't be about us, but about growing closer to God.  Lent can end up being a benefit in our secular world....like losing weight or making us feel good about ourselves, rather than focusing our hearts and minds on God.  Yeah, something along those lines.  Comparing Lent to a New Year's resolution can't be an original idea.  I should Google it to see if it's been done.

5pm.  Dang, it's been done.  Oh well.  There are plenty of good blog posts by other bloggers that will inspire everyone to have a purposeful Lent.  That one from Dwija is fantasic.  And Kathryn said it pretty great as well.

6pm Am I wrong to make Billy go to stage crew while the rest of us are going to mass?  I believe for him, going to stage crew is the bigger sacrifice in this case.  And it's not a holy day of obligation.  Yes, he's going to stage crew.  But wait, he'll have to get picked up right when mass is letting out.  I'll have to leave right after communion.  I can't do that.  I don't see another way around it.

7:45pm  Wow, Monsignor is spot on with this homily.  Just what I was going to say in the blog post that never was.  "Wake up call" YES! "He wants our hearts." YES!

7:55pm Man, that's big.  I hope my ashes don't look like hers.  I wonder if these ministers of ashes purposely make them bigger on people they don't like.

8:20pm.  People are looking at me leaving before mass is over.  Maybe if I look ill it will make it all okay in their minds.

10pm.  There's only one glass of wine left in that bottle.  I should drink it now so it's not tempting me for the next 39 days.  Yeah, I'll do that.


And that's about how my mind works, my friends.  I have a lot of work to do.  Maybe guiding the kids in their Lenten experience may help.  So this morning I was filling a basket with ideas for Lent for the kids to choose from each day.  I came up with this little poem. 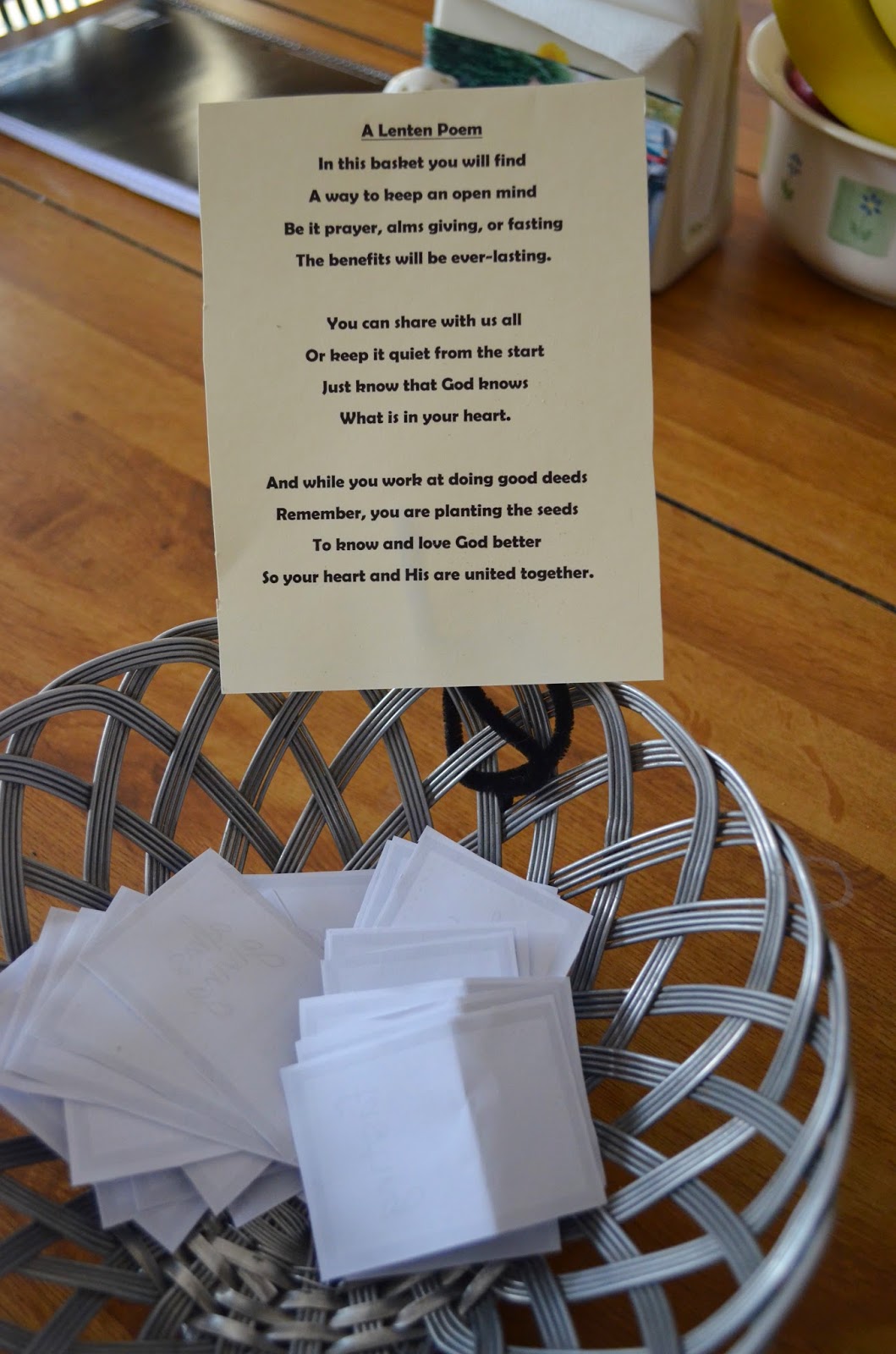 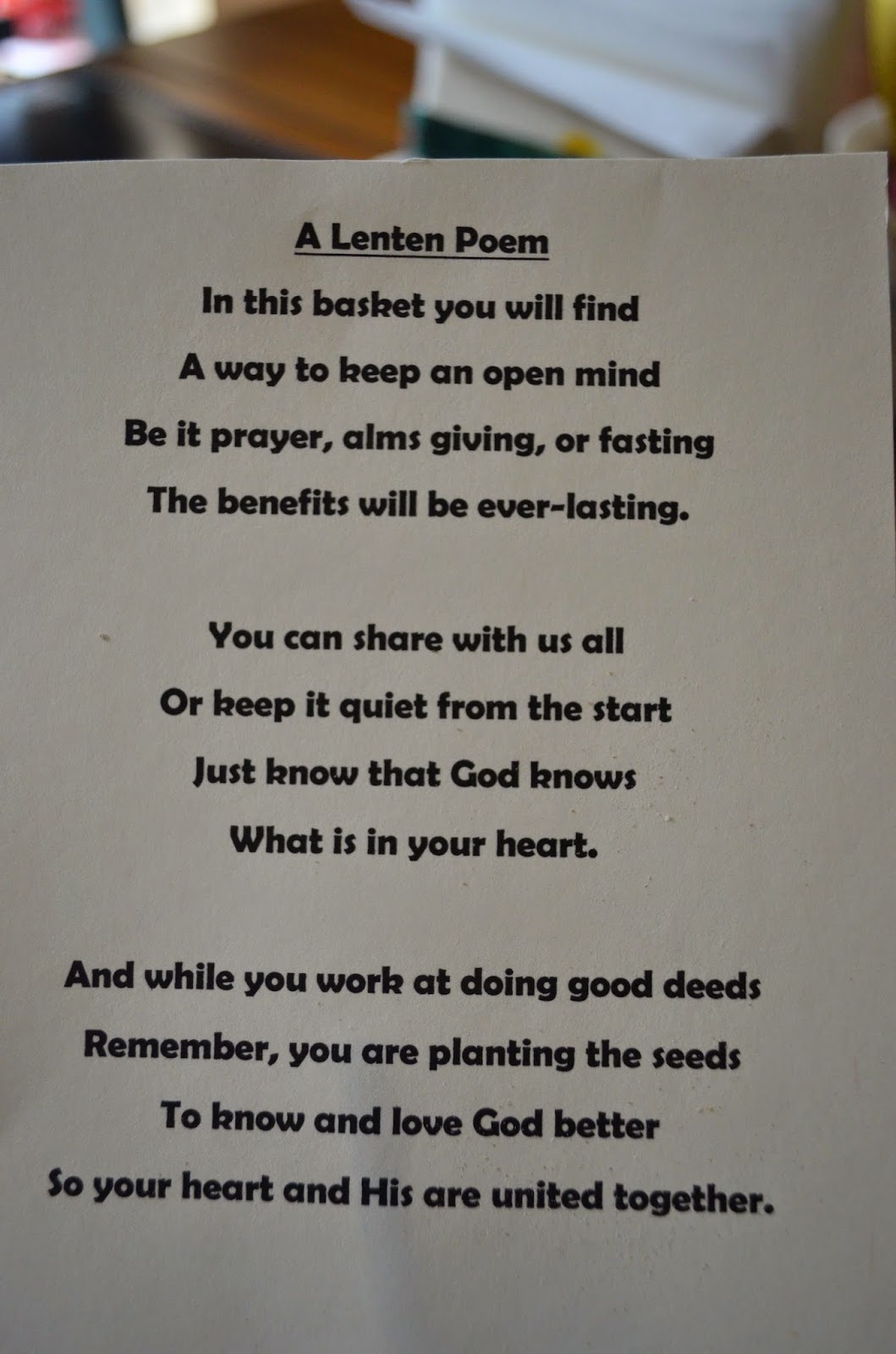 May you all have a purposeful Lent!

Skating To The Oldies

I mentioned in my last post that Bill and I were going to celebrate Valentine's Day by going to an '80's skate at a nearby roller rink.  Well, Friday came and I was super excited, yet feeling super guilty because I knew Bill wasn't looking forward to it as much as I was.  Who am I kidding; I'm pretty sure he was dreading it.


Little did I know he did a drive-by of the place during the week and scouted a little pizza place where we could have dinner first.  (Sweet move #1) 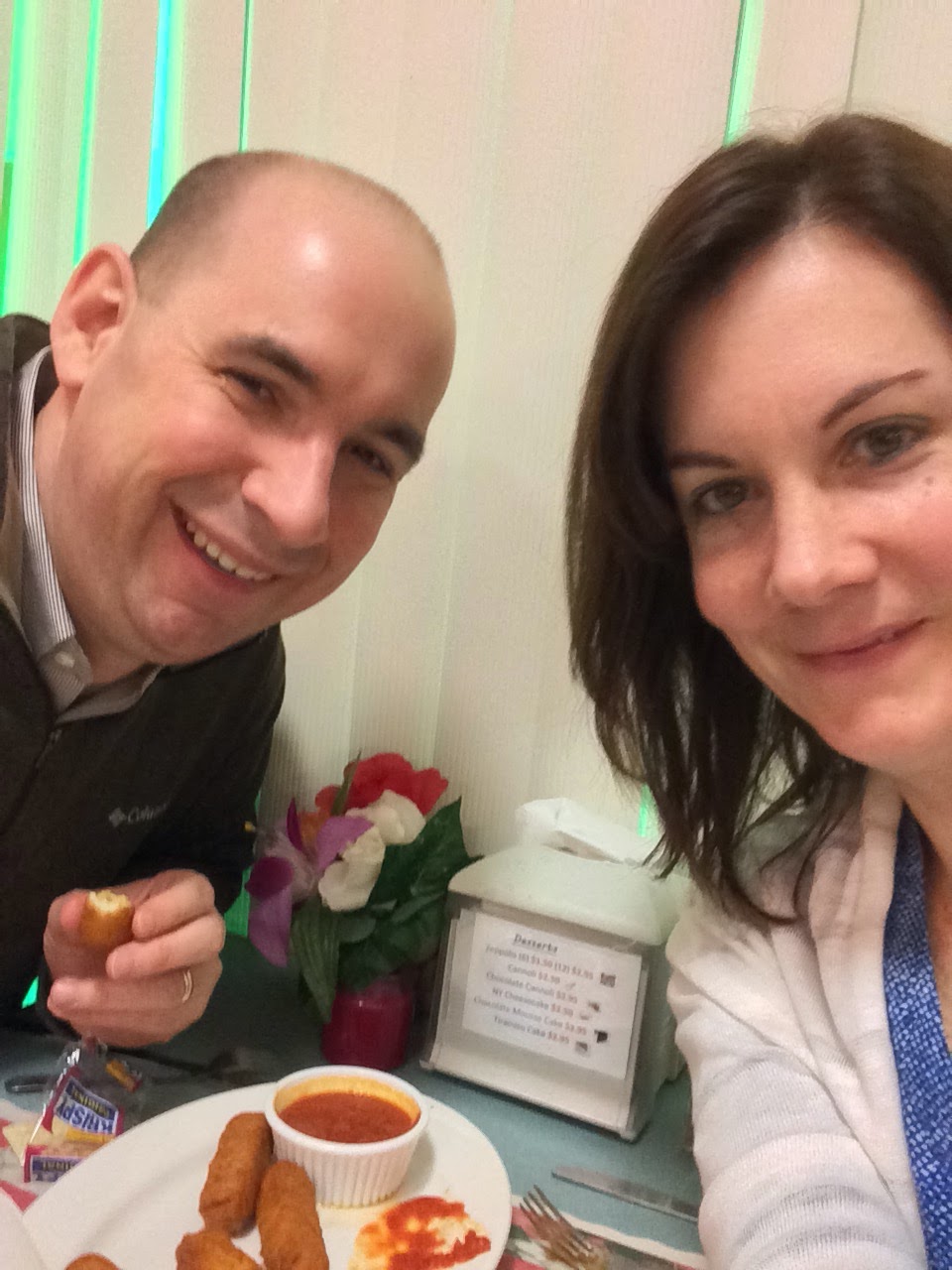 As we parked the car we sized up the clientele.  We saw lots of teenagers going inside.  My immediate thought was "uh-oh", but there was no way I was turning back now.  We got to the counter to pay and the lady said, "Are you here for oldies night?"  My reply was, "Uh, yeah, but we were calling it '80's night, thank you very much."

Holy cow can those teenagers skate.  They were weaving in and out and flying by us at high speeds.  But we eventually got in our groove.  Bill even held my hand and it wasn't even a couples skate. (Sweet move #2).

I couldn't believe they played "Let the Music Play" by Shannon, which was on my wish list, and I didn't even request it.  I think making requests wasn't possible because it seemed that it was already a pre-planned playlist going.  Too bad.  They could have used my help. 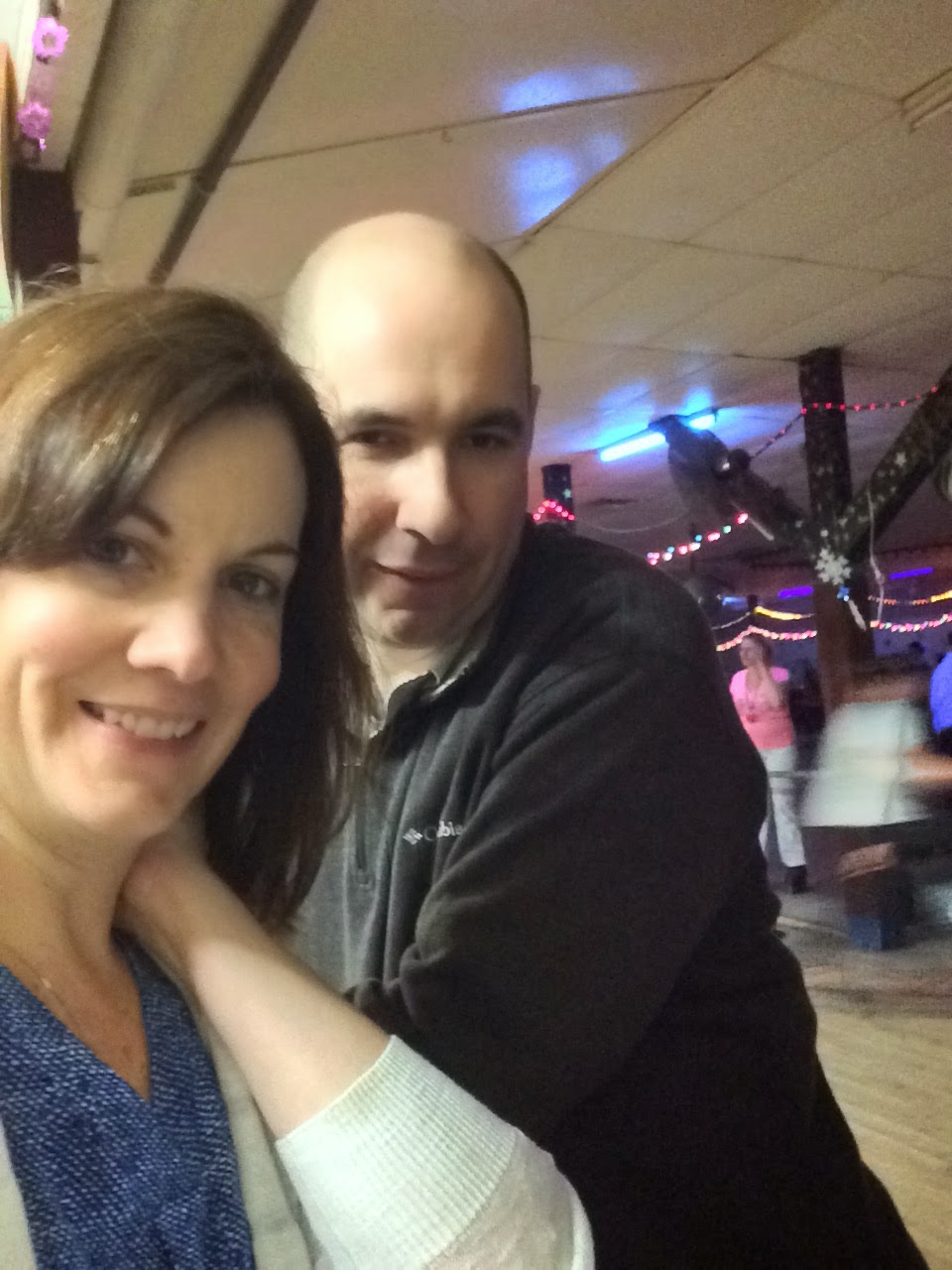 I must say I was quite impressed by Bill's skills on the floor.  He can even skate backwards.  Who knew?  I'm fairly certain he had a good time.  As for other people our age....well, there was one other couple there for '80's night, so we weren't the only ones.

On Saturday I was up early to take Billy to Stage Crew, and then Bill and I split the 2 basketball games the boys had later that day.  We made it home safely in the snow.  I parked myself in front of a fire while Bill made me a delicious Valentine's dinner. (Sweet move #3) 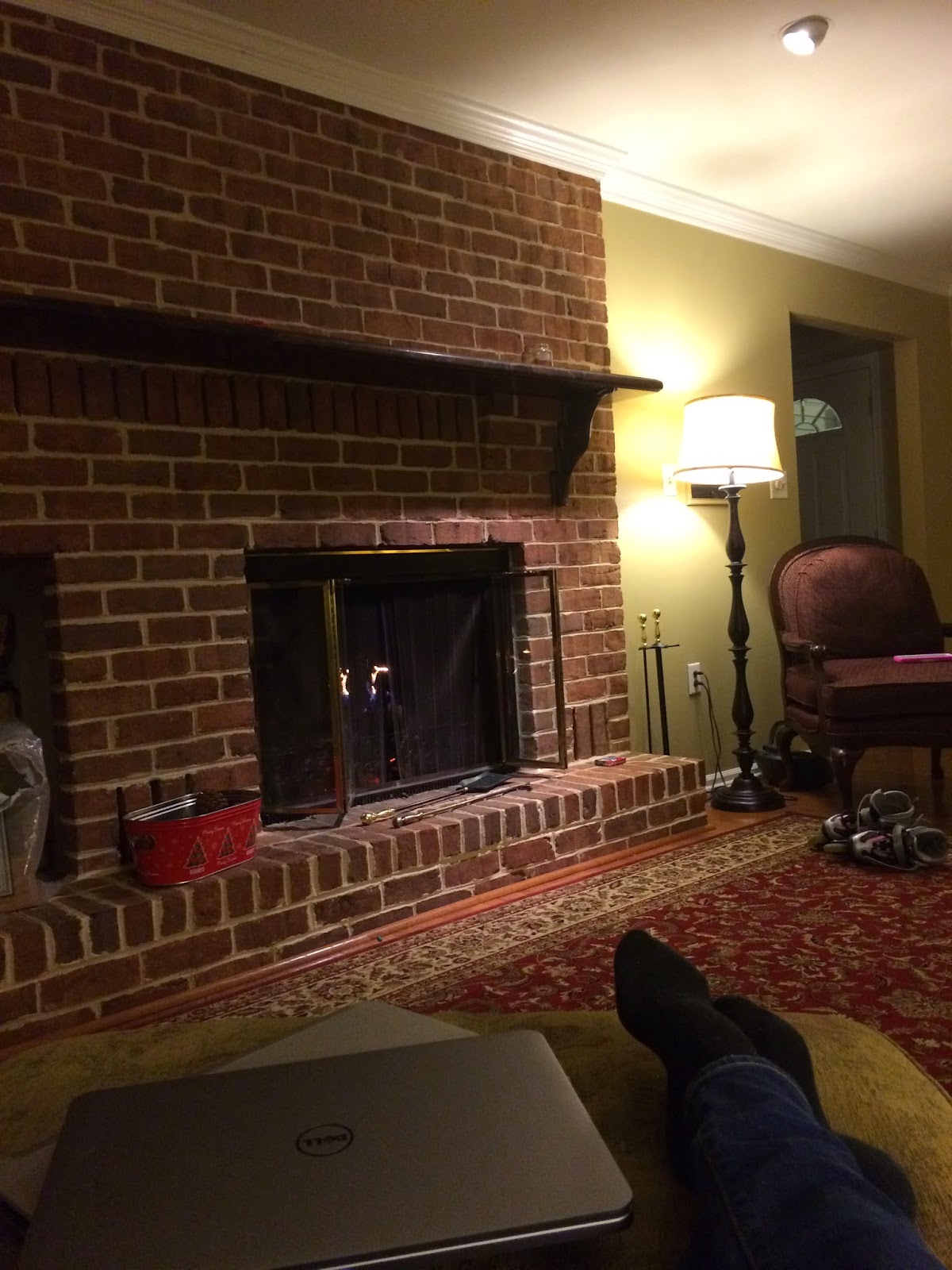 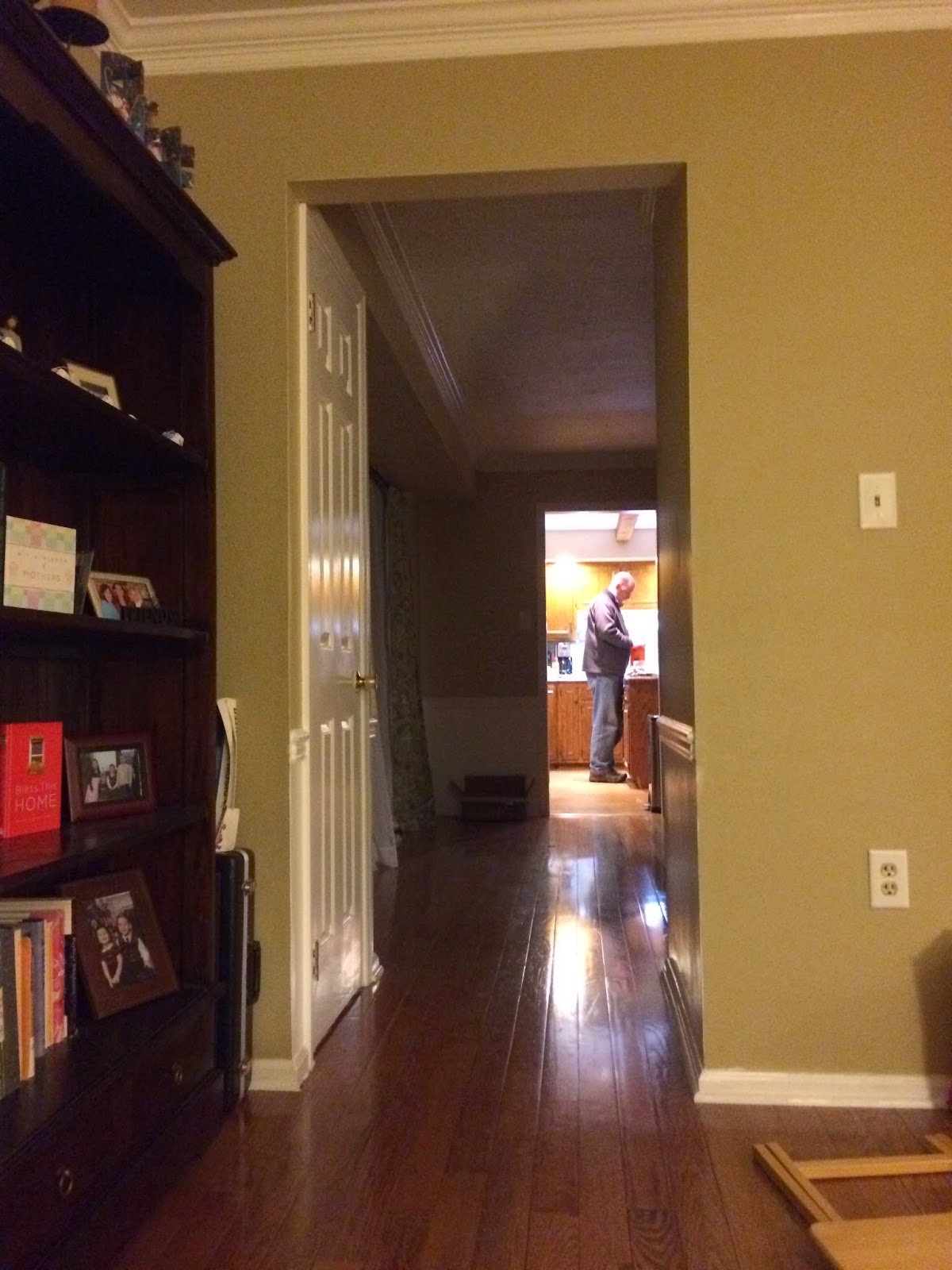 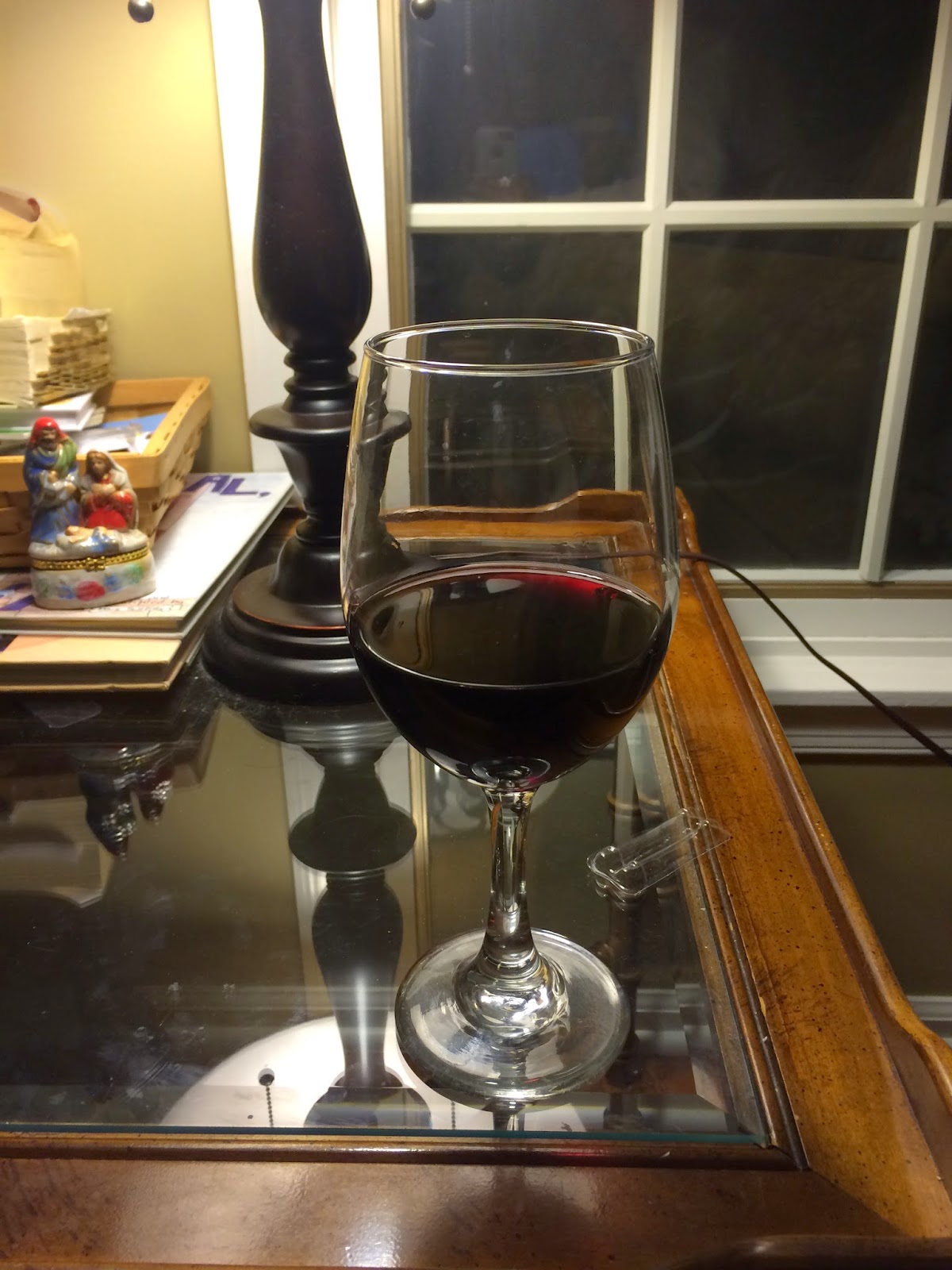 Oh boy, was it delicious. 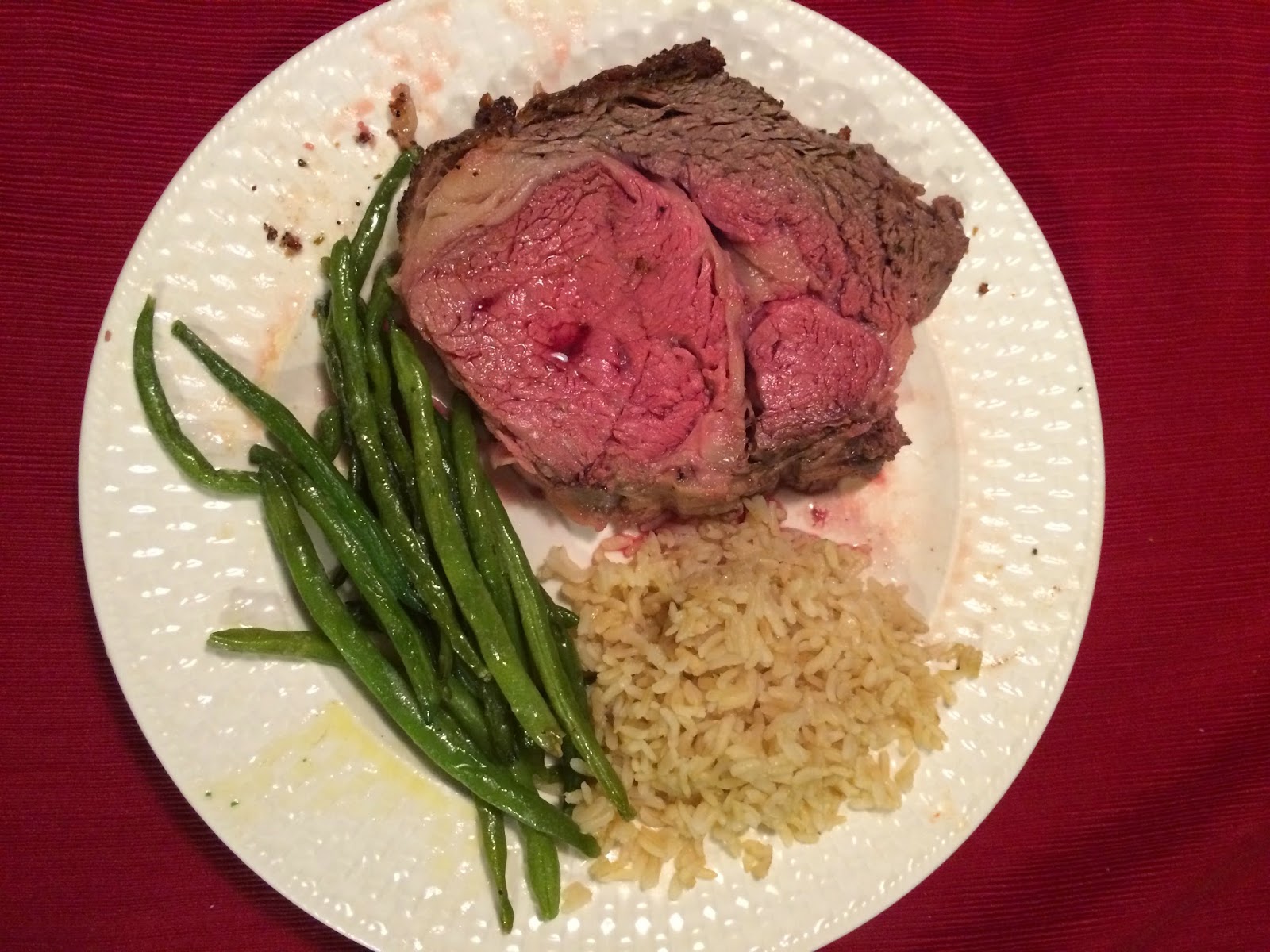 Fast forward to Monday and everyone is off from work and school for President's Day.
As luck would have it, the roller rink near our house has special afternoon hours!  All seven of us went this time and had a blast. (except the two times Bill fell, once on top of Mary!!).  They played "Wake Me Up Before You Go-Go" by chance and "You Dropped A Bomb On Me" by request made by...you guessed it... Bill. (Sweet Move #4)

I really know how to squeeze a special occasion for all it's worth, especially if it falls on a weekend.

Thanks to Bill for making it all happen and getting me "in my element" for the weekend.  You are the best.

Last weekend Bill took the boys on a road trip to Philadelphia to see the Villanova basketball game. 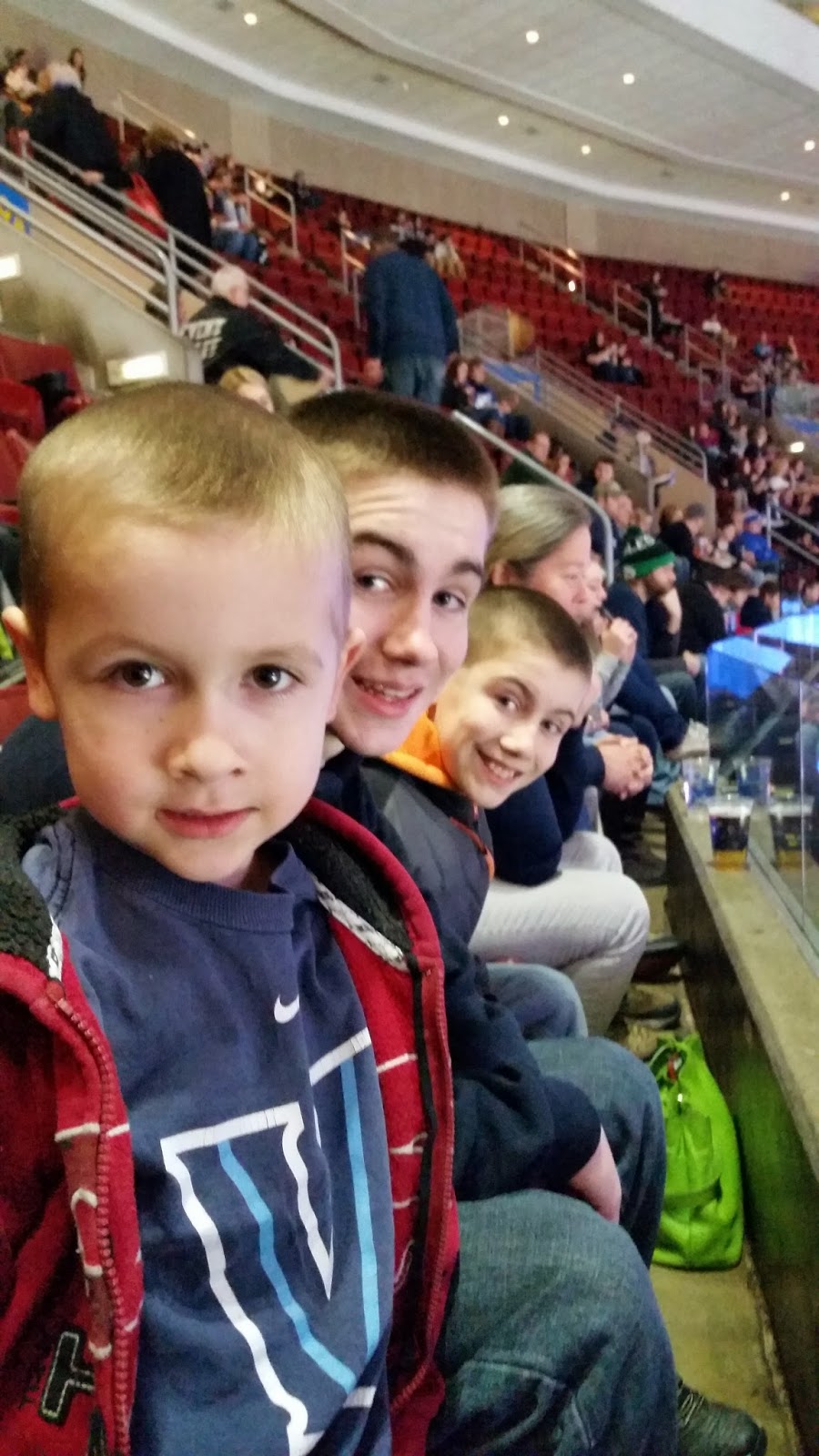 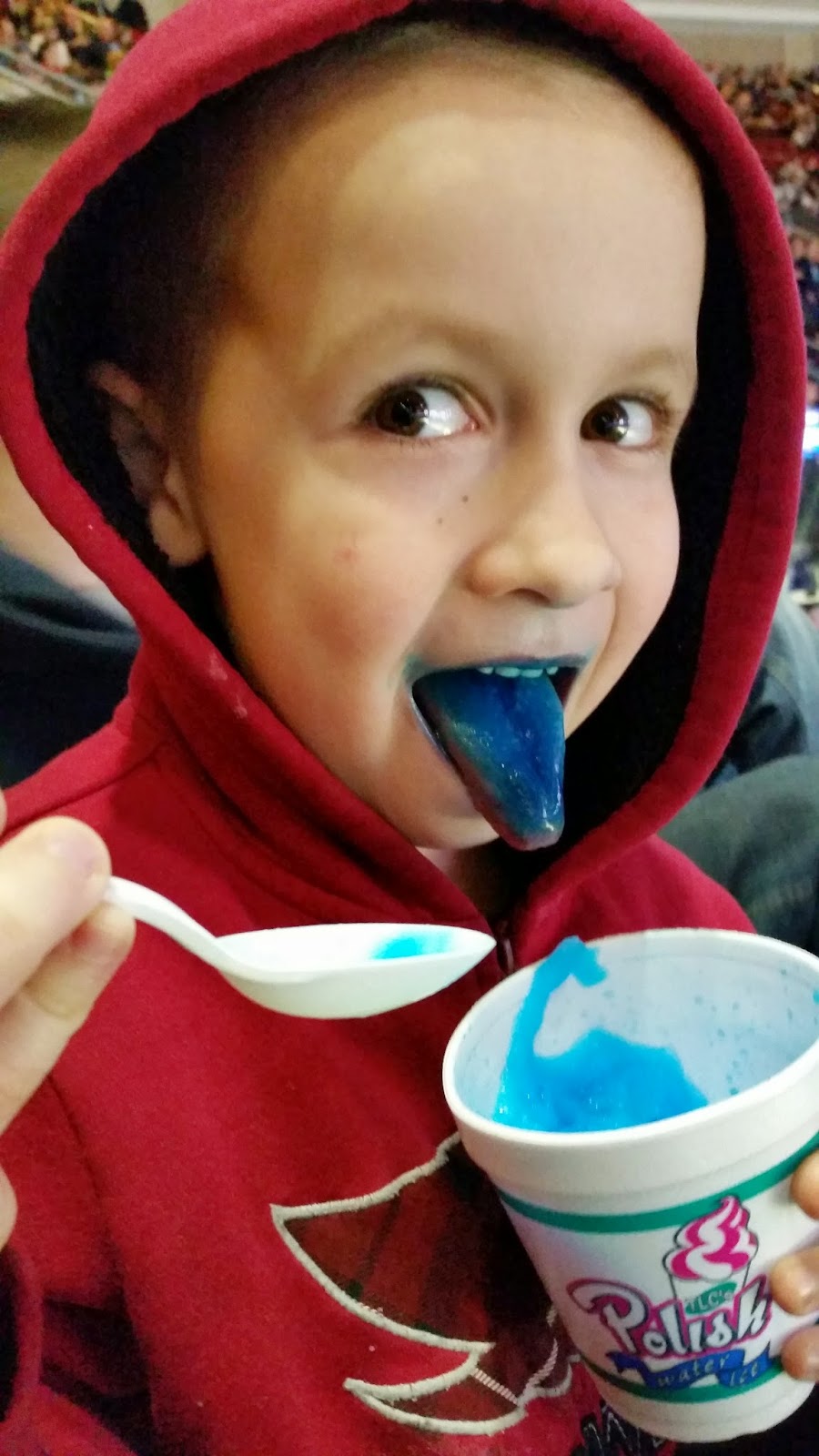 Not to be out done, the girls and I had our own special afternoon.  First, we went to lunch at Friendly's. 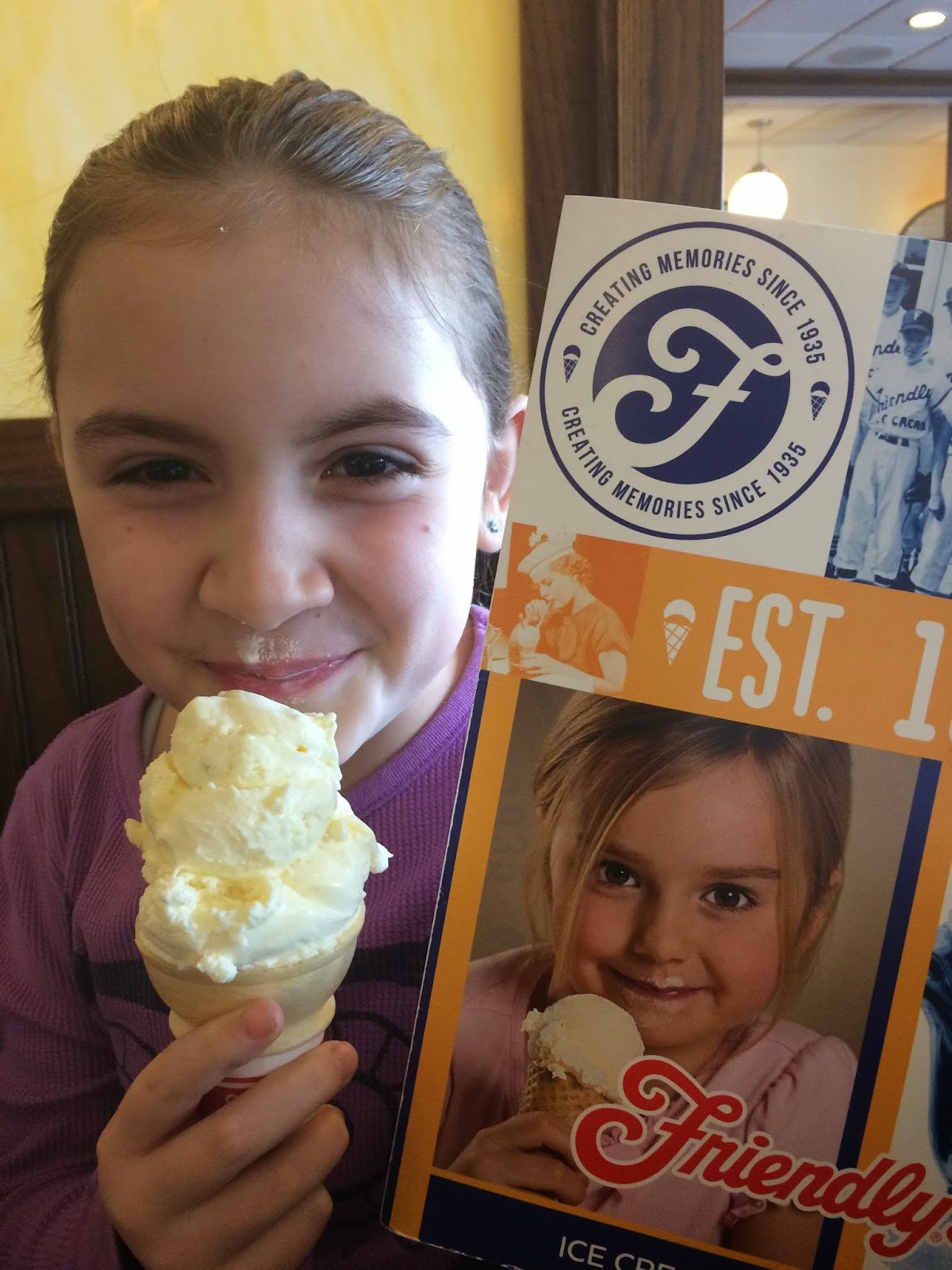 Next, we went roller skating. 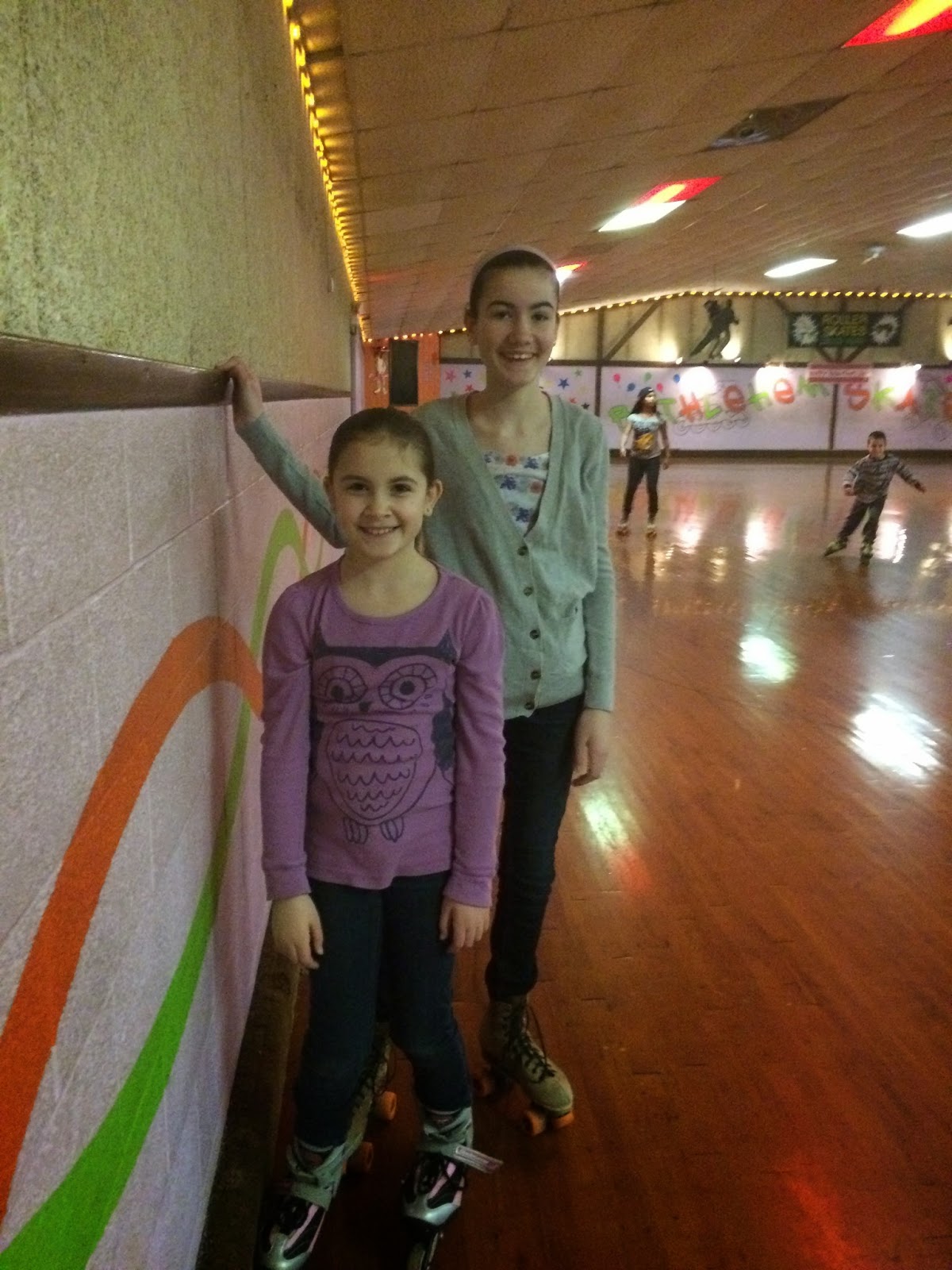 Oh boy, does this bring back memories.  My mom used to take me roller skating all the time when I was a kid...Skate Odyssey and Spinning Wheels were the hot spots in the early '80's.  I also remember desperately wanting a skating uniform (like they wear in figure skating) and she would not buy one for me. The nerve! 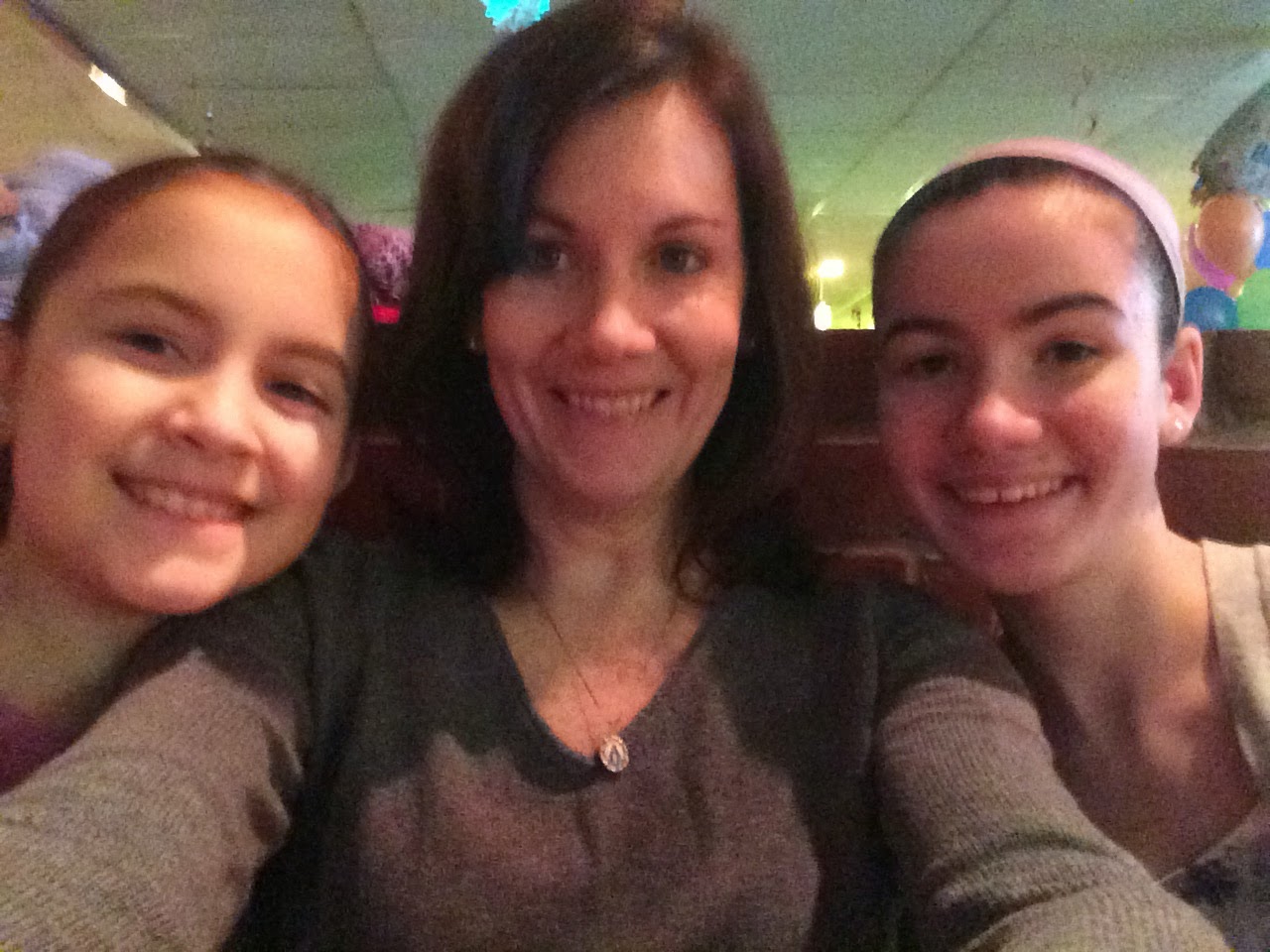 Yes, I skated on Saturday and had a ball. I was reminiscing about one of my favorite movies from the '80's called Xanadu.  Anyone remember it?  The backdrop was a roller skating arena.  It starred two of my favorite people....Olivia Newton-John and Gene Kelly.  It was a box office bomb from what I remember, but I love the sound track and own the album; great music which includes songs by ELO and Cliff Richards, and of course Olivia herself.

Daydreaming about the movie while I practiced my cross-over turns, I was wishing they played some '80's music, but that afternoon it seemed to be all Top 40.  Bummer.

But much to my surprise.....and I cannot even tell you how I jumped for joy when I read this.....another nearby roller rink is having a special Valentine's '80's music skate!!!!!! this Friday night.  You can bet I immediately cut and pasted that article and sent it to Bill's email.  Dinner and chocolates?  Heck, no!  We're going roller skating.  I think it is the perfect Valentine's date.  (for me anyway, not so sure for Bill)

I can see it now.  This will be me at the DJ booth:

8:55pm-"Can you pleeeeese play anything by Duran Duran or Michael Jackson"?