*Basketball season is underway.  This year we not only have two players, we have three!  Billy and Tommy, of course, and now ANN!  Yes, Ann.  She has started instructional basketball which is held every Saturday morning at 8am.  At 7:45am I will be saying into the speaker, "Large coffee with cream and sugar please."

On the first day she was Ner-Vous!  Can you tell? 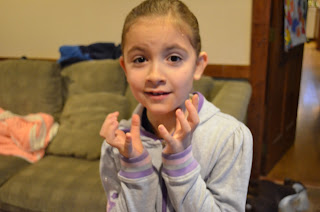 She cheered up long enough for me to get a better shot.

There were tears because her nerves got the better of her, but once inside she found a good friend and the fear was gone.  She did great!


*I need to break up with my hairdresser. She is not happy I'm growing my hair long again. Doesn't she know I'm done looking like Alana de la Garza and now it's time to look like Kate Beckinsale?


*Bill and I went out on a date Saturday night.  I had asked my sitter if we could drive her home since she only has her junior license and can't drive after 11pm. I was thinking we would be returning home really late.  Turns out we are not the party animals I thought we were.  We were exhausted by 9pm and forced ourselves to stay out until 10:30.  Sad, very sad.

*We had an awesome homily at mass on Sunday.  The priest was referencing the beautiful moons we had last week.  He spoke about how the moon doesn't shine itself; it is just a reflection of the sun's light. When the moon is hidden from the sun, that is when it's not shining or not full.  Then came the analogy....I LOVE analogies.  When we hide ourselves from the Son (get it?) we aren't going to shine and be all we can be.  Of course Father said it more eloquently than that, but that's the gist.

*Matthew's preschool teacher says we may want to think about holding him off from starting kindergarten next year because he will be one of the youngest in his class and he's showing signs of immaturity.

This morning he had left over, cold pizza for breakfast.  Seems to me he's already prepared for college. 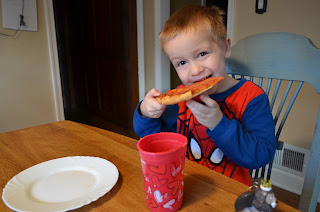 Have a great day everyone!