Tommy has taken up piano.  Last night he had his first lesson.  He was so excited I thought he might burst.  When I dropped him off at the teacher's house he was a bit nervous.  She immediately put him at ease having him pick out a sticker for his book, introduced him to the family dog, and then got down to business.

When I came back to get him the look on his face was hard to read.  I couldn't tell if he was thinking, "Get me out of here!"  Or, "Why are you here already?"  Turns out it was the latter.  He was shocked and not happy that I was back so soon.  He asked me later why the lessons can't be five hours long.

At breakfast I caught him practicing his finger taps and afterwards he went directly to the piano to do his 4 "songs" he has for homework. 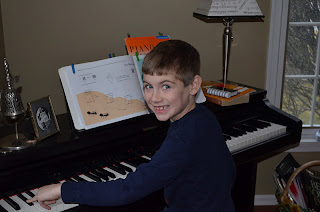 I'm so proud of him. Let's hope his excitement continues!
Posted by Kathleen at 11:57 AM