~he'd forget about it.

~his friends said they were lame.

No such luck. Billy went to his first school dance. A sixth, seventh, and eighth grade dance. UGH!

I knew it was tonight. I wasn't going to bring it up. Bill and I never thought this day would come, so we didn't have a firm answer. When Billy came home from school he had the permission slip in hand ready for me to sign. What to do? What to do?  Wasn't it just yesterday I let him cross the street by himself?

We let him go, making sure he knew that it wouldn't be a regular occurrence. I mean, I went to grade school dances, but I'm pretty sure I was in eighth grade before I was allowed to go. And I went to Catholic School, so you know we had to leave room for the Holy Spirit if we danced with a boy!

This is Billy trying to get out of the minivan to get into the dance. I wasn't going to unlock that door until I was done spewing all of my warnings and instructions on behavior, respect, etc. He looks thrilled, doesn't he? 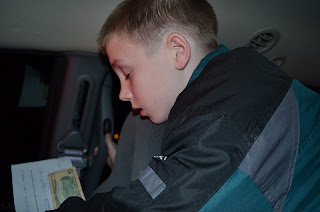 I'm pretty sure he didn't hear a word I said.

Here is a picture I took on my surveillance of the gym after he went inside. 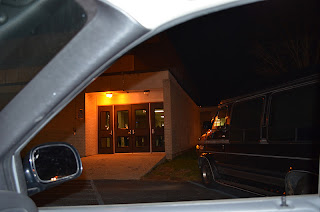 I couldn't stay there for long. That girl inside the door saw me snap that picture. I had visions of the police coming up behind me saying, "Move along, Ma'am."

I had him rate the dance on a scale from one to ten. He gave it an EIGHT!!  He claims the only reason he went, and the only reason it was fun was because of the contest they had--- to shoot a basketball from the 3 point line. He really wanted to win it. Let's hope that's the real reason and he got it out of his system.

We had ice cream before bed. 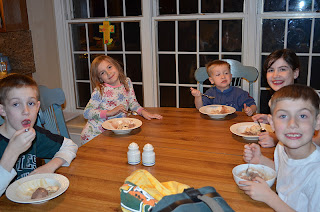 I've got to at least try to make the comforts of home a lasting memory in his brain ( and hopefully be a TEN on the 10 point scale.)
Posted by Kathleen at 9:56 PM