I received my Mother's Day present a little early this year.

The present- well, it was - a miracle.

You see, on Friday afternoon around 4 o'clock, Tommy was hit by a car.

He was riding his bike on our street, right outside our house.  He didn't stop where there is a stop sign and a driver hit him.  He was thrown from his bike.  He walked away with some scratches.  That's all.  Just scratches.

I was outside on our driveway when I heard the tires screech, and then a loud bang.  I remember seeing my fifteen year old neighbor turn and run towards the car.  The look of horror on her face scared me to death.  Luckily, it was only a few seconds before I saw Tommy running towards me, crying.  He kept apologizing to the driver..."I'm so sorry, I'm so sorry"'; followed by, "Please let this be a dream."

There were so many things that followed in the next few hours:

*The calming neighbor who called 911, spoke softly to me and Tommy, and gave me the much needed hug that made me "lose it."

*The police and EMT's that came and handled everything.

*The young man who hit Tommy-scared and in shock, I think.

*The neighbors who stopped by to make sure we were all okay.

*Ann crying and needing me to hug with her.

*Another neighbor who swooped up my other children and fed them dinner while I took Tommy to the E.R.

* A text from yet another neighbor who had the Bishop from her church and his congregation of 26,000 members pray for Tommy.

*The long wait in the hospital room and the time I had to absorb everything that happened or what could have happened.

*The visit from the young man when we got home to see if Tommy was still okay.  The hug that we shared knowing it could have been worse for all of us.

*The pounding headache and the burning eyes.

*Waiting for Bill to arrive home from a three hour long car ride to tell him what happened and "losing it" all again.

*Having Tommy sleep in between us and our grateful hearts through the rest of the night.

I cried off and on over the weekend. Every time Tommy and I looked at each other we cried and hugged.  In my mind, I keep hearing the crash, the look on Tommy's face, hearing him recall the events in his memory.  It is tough.

I also remember walking out of the ER with paperwork on how to take care of abrasions.  Abrasions!!  Not stitches, not a cast, not even an arm sling.

I also remember the feeling of walking out of the ER with Tommy by my side.  It was the best feeling ever. 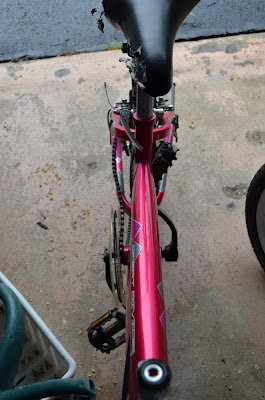 Tommy was riding Mary's bike because he lent his bike to a friend.  When Tommy saw the car coming, he tried to brake using his pedal brakes....like the ones on his bike.  Mary's bike doesn't have pedal brakes.  I'm not sure if that would have saved him the hit.
The bike was found under the front of the car. 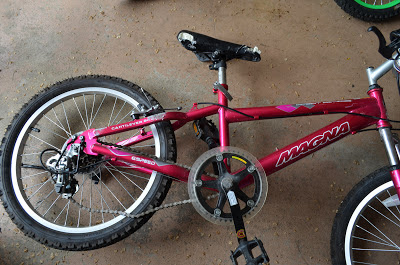 The pictures don't really do the damage justice.  The handle bars just hang loosely and the street has a foot long gash in it, I guess from the bike being dragged.  Not sure how Tommy managed to fly away unscathed, but thanks be to God, he did. 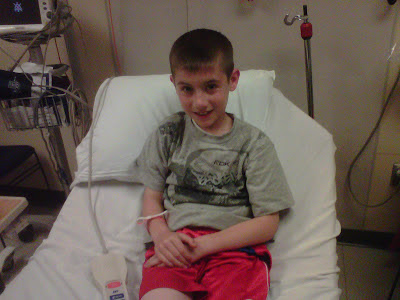 Here's the happy kid after some ginger ale, crackers, and the reassurance that Mary will not kill him for ruining her bike.


My heart has been going out to all the parents who haven't been so lucky.  In fact, just the day before in a town close to us a boy was killed on his bike by a car.  It has me questioning why we were the lucky ones and what lessons we're supposed to learn from it all.

I hope I figure it all out and repay the debt that I owe for this blessed Mother's Day.